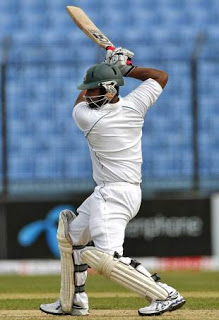 A solid performance from Bangladesh’s batsmen on a placid track marked the start of the Test series in Chittagong, leaving the bowlers potentially facing five days of hard work. The morning was slightly overcast but the sun didn’t take long to break through the clouds, confining whatever assistance was available for the bowlers to the first hour of the day. Deciding to bat without hesitation, Bangladesh, led by half-centuries from Mushfiqur Rahim and Tamim Iqbal, built a platform for a formidable first-innings score but suffered a few jolts along the way, some self-inflicted. The lack of assistance from the pitch meant Darren Sammy had to shuffle his bowlers, get them to bowl from different angles, change ends and rely heavily on variations. The attacking instinct of a couple of well-set Bangladesh batsmen helped West Indies break through but they didn’t do themselves much good by employing defensive fields for far too long immediately after lunch and tea. The spread-out fields enabled the hosts, Mushfiqur and Raqibul Hasan especially, to rotate the strike comfortably – 136 runs came in singles (102) and twos, more than half the score. Once the sun was out, the swing didn’t last long, and movement off the pitch was limited. Tamim’s solidity was an obstacle for the West Indies bowlers at one end but Imrul Kayes’ occasional extravagance gave them a window of opportunity. Kayes was beaten a couple of times while trying to drive on the up and his first boundary was an uppish chip over Darren Sammy’s head. A change of angle from Rampaul gave West Indies their first breakthrough. He bowled from round the wicket, produced an outside edge from Kayes that went for four, followed by a failed drive. The next ball squared the batsman up, angled in and then nipped away just a hint to kiss the edge. Shahriar Nafees settled in quickly with a couple of confident shots against Sammy followed by a lovely drive off Fidel Edwards. Nafees survived a close shout for lbw against Edwards, though a good part of the ball appeared to have pitched outside leg, before his stay was cut short by a bloody blow to the nose. Edwards slung down a bouncer from round the wicket that forced its way between the peak of the helmet and the grille, forcing Nafees to retire hurt. Bishoo, who probed away in search of turn, doled out a few long-hops that Tamim duly dispatched through the off side. There were, however, some signs of encouragement for the spinners after lunch. The batsmen were unsettled by a few deliveries that kept low and experienced the odd moment of discomfort when the ball turned. West Indies made their next breach when Tamim attempted a slog-sweep against Marlon Samuels, and top-edged a catch to midwicket; a healthy dose of slow bowling with the fielders pushed back had allowed the pair to work singles and twos but a rush of blood cost the well-settled Tamim a century. Raqibul looked assured during his stay, solid in defence and punishing the bad balls, and built a promising stand with Mushfiqur, who was his usual busy self, creating opportunities to score by using his feet, making room against straight deliveries, and running well between the wickets. Bishoo almost had Mushfiqur when he edged one that turned but was let down by Sammy, who failed to get down in time for a low chance at slip. Sammy made amends somewhat when he trapped Raqibul in front with a ball that nipped back in but Bangladesh were still in a strong position. Despite the wickets, the momentum never swung West Indies’ way due to the easy access to runs. Even Shakib Al Hasan’s initial scratchiness was offset by Mushfiqur’s fluency at the other end. He stepped out of his crease to loft Bishoo and Samuels when mid-on was brought in and employed the sweep, paddle and his favoured cut to ensure there were no extended periods of silence. Shakib grew in confidence, slapping Bishoo through the covers and pulling Sammy for consecutive fours. Having added 79 with Mushfiqur, Shakib then chased a wide delivery from Samuels to be caught behind with stumps in sight. It wasn’t until the 90th over that Sammy took the second new-ball, after Edwards’ reverse-swing had been dealt with by Mushfiqur and Naeem Islam. The hosts lost more wickets than they should have in friendly conditions, but will back Mushfiqur to break the trend of well-set batsmen giving it away.